You Can Slow Down Biden’s Lofty Agenda

As Joe Biden steps into his new role as President, he has teamed up with House Democrats to push through a wild agenda in his first 100 days.  In fact, over the first two weeks, they have created a theme for every day. These themes include COVID, economic relief, buy American, equity, climate, health care, and immigration. President Biden also signed 17 executive actions on his first day alone. During these first couple of weeks, we can expect to get a first-hand look at the priorities of his administration. 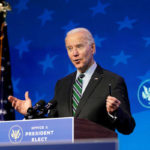 Democrats are starting off by tackling COVID-related matters. While Biden has already signed an executive order to enforce a mask mandate in federal buildings, Congress is slated to pass a bill to issue state bailouts and stimulus checks as well as a $15 minimum wage mandate. Biden’s “relief” plan is estimated to cost taxpayers $1.9 trillion. The biggest fallout that is not included in this calculation, however, is the burden that small businesses will have to bear. After oppressive restrictions due to the pandemic and now, additional long-term mandates like a higher minimum wage and expanded paid leave, many will not survive.

One of the positive initiatives that has carried over from the Trump administration is the push to buy American products.  For too long, we have relied on countries like China to make our goods allowing them to creep into American culture and government. The catch-22 however, is the massive restrictions mentioned above that the Biden administration plans to put on American businesses. The only way American-made products can thrive in the United States is if they are able to operate within free-market principles without the regulatory burden of the federal government.

Issuing another blow to American families, the Biden administration is looking forward to expanding Obamacare in massive ways. On President Biden’s first days, he plans to rescind the Mexico City Policy which has banned the promotion of abortions overseas, force all Title X recipients to promote abortions and disavow the Geneva Consensus Declaration which established the family as a fundamental part of society and upheld a baby’s rights in the womb.  He has also expressed his opposition to the Hyde amendment which will pave the way for taxpayer-funded abortions.

The most absurd issue tucked away in President Biden’s COVID plan is climate change initiatives. He signed an executive order right away to rejoin the Paris Climate Accord which has burdened so many businesses in the past. He also has plans to stop construction on the Keystone Pipeline and enforce oppressive regulations on automobiles.

Not only does his administration see abortion as healthcare, but they see transgender services as essential.  They plan to reinstate policies that allow individuals who are actively transitioning to serve in the military. They will also bring back Obama-era provisions that allow boys in girls’ bathrooms, locker rooms, and sports. House Democrats are already poised to pass the Equality Act which would solidify these initiatives and more if it reaches the President’s desk.

Perhaps the most aggressive action is the President’s immigration plan. House Democrats introduced his immigration bill on Wednesday which would allow a pathway to citizenship to 11 million immigrants, including those enrolled in the Deferred Action for Childhood Arrivals (DACA) program. Matters of immigration have recently been contentious among both Democrats and Republicans with neither party coming to a united consensus on one bill. That is good news for this bill in hopes that it will not move forward toward becoming law.

President Biden has already taken action on two immigration measures. His recission of the ban on countries that pose a danger to the United States severely undermines national security efforts put in place by the Trump administration. He has already issued an executive action to stop the border wall construction, but questions remain whether or not it can be upheld seeing that contractors have already been paid to complete the project.

At first glance, this list can seem too big to tackle. However, time is on our side. The Biden administration’s goals are lofty and nearly impossible to complete in 100 days. Democrats only have a slight majority in the House and an even smaller majority in the Senate resulting in a more robust negotiation process. Because both sides will be looking for ways to compromise, we must be in contact with our representatives, no matter their party affiliation, in order to hold them accountable. Just like we saw with the Trump administration, Biden’s executive actions, at times, will be challenged in the courts where President Trump placed judges. Although we cannot expect to see the same pro-family policies come out of a Biden administration, we have hope that some of the policies, laws, and federal judges that the previous administration put into place will slow down a progressive agenda.

Eagle Forum has many resources to combat these harmful policies and ways for you to get involved in making a difference, not only in the political sphere but also within our culture. You can view all of the topics we cover here. Be sure to sign up for our emails and alerts so that you do not miss an opportunity to make your voice heard!