By Veronika Kyrylenko - The New American
Published: 16 May 2022 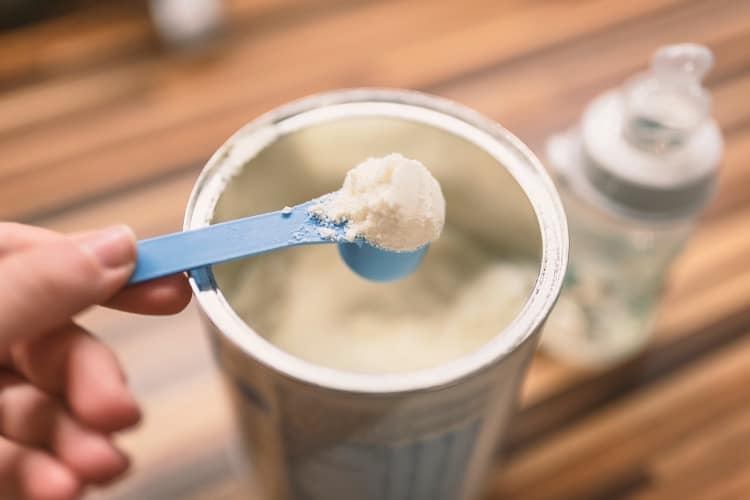 As American parents go scrabbling from store to store amid a massive nationwide shortage of baby formula, the Biden administration is sending “pallets” of it to the southern border.

As of May 10, the out-of-stock rate for baby formula nationwide reached a staggering 43 percent, up from 30 percent in April, reported Datasembly.

“This issue has been compounded by supply chain challenges, product recalls and historic inflation. The category started to see stocking challenges beginning in July 2021, and the situation has continued to worsen into 2022,” said the company’s CEO Ben Reich, adding that “we don’t see it slowing down.”

“Among the metro areas in the above states, San Antonio’s out-of-stock rate has mushroomed to 57%. It’s 52% for Memphis and Nashville, and 50% for Houston and Des Moines, Iowa,” detailed the report.

While American families started noticing shortages of baby formula back in November 2021 due to the Biden administration’s inability to address supply-chain shortages, the issue got worse in February, when a major U.S. producer of the product shut down one of its facilities.

Forbes reported that Abbott Laboratories closed a facility in Michigan in February after the Food and Drug Administration (FDA) opened an investigation into links between formula produced at the plant and infants who contracted bacterial infections. The report noted that the infection “possibly led to two [infant] deaths.”

The FDA issued a warning to consumers not to use certain formulas produced in Abbott’s facility in Sturgis, Michigan.

Even before the warning, Abbott announced that it had initiated a voluntary recall of popular yet “potentially affected products,” including Similac, Alimentum, and EleCare powdered formulas.

According to a statement quoted by NBC News on Wednesday, the company said the production at the Michigan facility could resume within two weeks of receiving FDA approval, which was given on Tuesday. Then, it would take approximately eight weeks for the product to reach the stores. The company also stated that there was no evidence of the connection between its formulas and the infants’ illnesses.

In the meantime, the FDA was looking to bring in foreign alternatives — and quickly. According to the Tuesday statement, the federal regulators are “offering a streamlined import entry review process for certain products coming from foreign facilities with favorable inspection records.”

The baby-formula shortage is considered a critical issue on the both sides of the aisle. According to U.S. House Oversight Committee Chairwoman Carolyn Maloney (D-N.Y.) and her colleague Representative Raja Krishnamoorthi (D-Ill.),

The national formula shortage poses a threat to the health and economic security of infants and families in communities across the country — particularly those with less income who have historically experienced health inequities, including food insecurity.

On Wednesday, White House principal deputy press Secretary Karine Jean-Pierre claimed that “ensuring that infant formula is safe and available for families across the country is a top priority to the White House and this administration.”

Yet, indicating just how serious the administration is about the crisis, Jean-Pierre laughed when asked who was tasked with overseeing the resolution of the shortages and responded that she didn’t know who it was.

On Thursday, the White House released a statement outlining steps to boost formula supply, including getting more formula from overseas, cracking down on price gouging, and expanding availability for low-income families.

Earlier this week, the Biden administration was said to be sending scarce baby formula to migrant-holding facilities to provide for the infants of illegal immigrants at the southern border.

The news was broken by Representative Kat Cammack (R-Fla.), who posted pictures to her Facebook page Wednesday of alleged pallets of baby formula being sent to the border.

“The first photo is from this morning at the Ursula Processing Center at the U.S. border. Shelves and pallets packed with baby formula. The second is from a shelf right here at home. Formula is scarce. This is what America last looks like.”

In a video post, Cammack explained that a border agent sent her photographs of the deliveries. That agent, she added, told her, “‘Kat, you would not believe the shipment I just brought in.’ He has been a border patrol agent for 30 years, and he has never seen anything quite like this. He is a grandfather, and he is saying that his own children can’t get baby formula.”

The Deseret News reported that while breast milk is the best food that a baby can get, the exclusive nutrition from this source has sadly become relatively rare,

According to the USA Today, desperate American parents resort to attempting to water-down supplies or making their own formula, feeding their infants with toddler formula, or with goat milk, which health experts are recommending against.