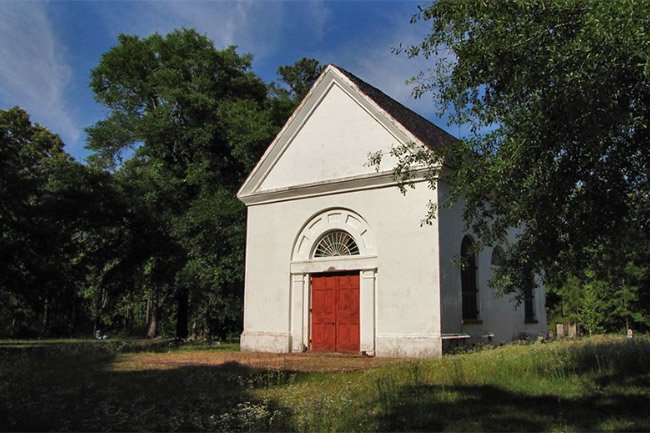 THE RECORD OF JOINT MEETINGS in the Charleston area had been good in spite of the Charleston riot of September 6th. There had been a joint meeting at Strawberry Ferry and successful joint meetings "on Johns Island, on Edisto Island and at other points." Nobody was suspecting trouble when a joint meeting was scheduled for "Brick Church, about three miles from Cainhoy, in the parish of St. Thomas and St. Dennis," to take place Monday, October 16, 1876.1

Democrats chartered the steamer Pocosin which left that morning with around 150 men on board including many black Democrats. At the last minute word was sent that Republican leader Bowen wanted to ride, and the steamer waited until he was aboard with 150 black Republicans including "McKinlay, Cyrus Gaillard and other prominent speakers."2

The day was beautiful and the trip very pleasant with Democrats "firing their pistols at such objects in the river as attracted their attention." Little did they know how valuable that ammunition would be a couple hours later. When they arrived, many Democrats were low or out of ammunition, not suspecting any trouble.

Republican Bowen knew their ammunition was low. He "started off in a buggy as soon as he could land, and must have reached the Brick Church half an hour or more before the arrival of the Democrats." Cainhoy villagers "provided wagons and other vehicles to convey" the Democrats to the church. They were very friendly and everybody was having a good time.3

A Mr. William Venning had also gone ahead and when he got there he found "a large body of negroes, well armed with muskets and rifles," and he heard them say that "they would not suffer Delany, a colored Democrat, to address the meeting." Mr. Venning also heard Bowen say to the blacks "hide your guns," which they did.4

The speakers platform was on a small hill. To the left of the platform "was an old brick building (an old kitchen), with only part of the walls standing." The church was 150 feet in front of the platform. There was a small building to the right of the church, used as a vestry.5

Bowen "called the meeting to order," the Eutaw band brought by the Democrats played a "lively air" and the speaking began. Democrat "W. St. Julien Jervey was the first speaker" followed by black Republican W. J. McKinlay "who seemed nervous and excited" and "began a very violent speech." The black Republicans, apparently thinking McKinlay was the black Democrat Delany, gave the signal and the massacre began.6

There were 40 to 50 black Republican muskets hidden in the chimney of the old building to the left of the speakers stand. The whites had found them but not said anything about them under instruction from George Rivers Walker who said:

I am sure that it was part of a plot to make the whites seize these arms as an excuse for bringing on a row; but at the time I advised that the guns be watched but not molested. Suddenly the whites by the old house saw emerging from pines and swamp at the back of the 'stand' detachments of negroes armed with muskets, which they pointed toward us. At the same moment a confusion was raised on account of the supposed Delany taking the stand, this commotion probably being the signal for the detachment to appear.7

The whites did not seize the guns until they saw the detachment of blacks with guns "at full cock." At that point, whites "made a rush for the chimney filled with guns, loaded, as I (George Rivers Walker) am told by all, with powder only." Venning and two others said the first shots were fired by the negroes advancing from the swamp. Walker said he "saw the negroes pouring volleys into these unarmed boys."8

The whites ran toward the vestry by the church sometimes returning fire from "small pocket pistols, but, of course, against volleys of buckshot, slugs and broken pieces of lead fired from muskets, the negroes retiring behind the pines, the pistols were useless." Walker said "I saw Abram Smith, a negro trial justice, on the stand firing at some boys and men who were running away and defenceless."9

The blacks went into the woods to reload which gave the whites a slight breather. Walker said that Bowen was at the vestry and asked for a white volunteer to go with him to try and persuade the blacks to break off the attack. Walker immediately volunteered. Bowen told him to stop the Democrats from firing while they went, so Walker said "'Democrats, reserve your fire while I go with Mr. Bowen', and they strictly obeyed."10

Walker goes on to say that Bowen, at first, had some success stopping the attack even though he believed Bowen was responsible for setting it up in the first place. The effort was short lived because:

. . . suddenly Cyrus Gaillard, an incendiary negro, pushing Mr. Bowen and myself aside, called out to the negroes, "Mister Bowens, we can't listen to you now. Come on, boys; we've got 'em, now let's kill the sons of b______," and, rushing past us, he incited them to recommence; and I solemnly swear that they fired again on the whites without provocation, and without a shot being first fired by them.11