Abortion Activists Waging 'A Kind of War on Advocates for Life': Congressman 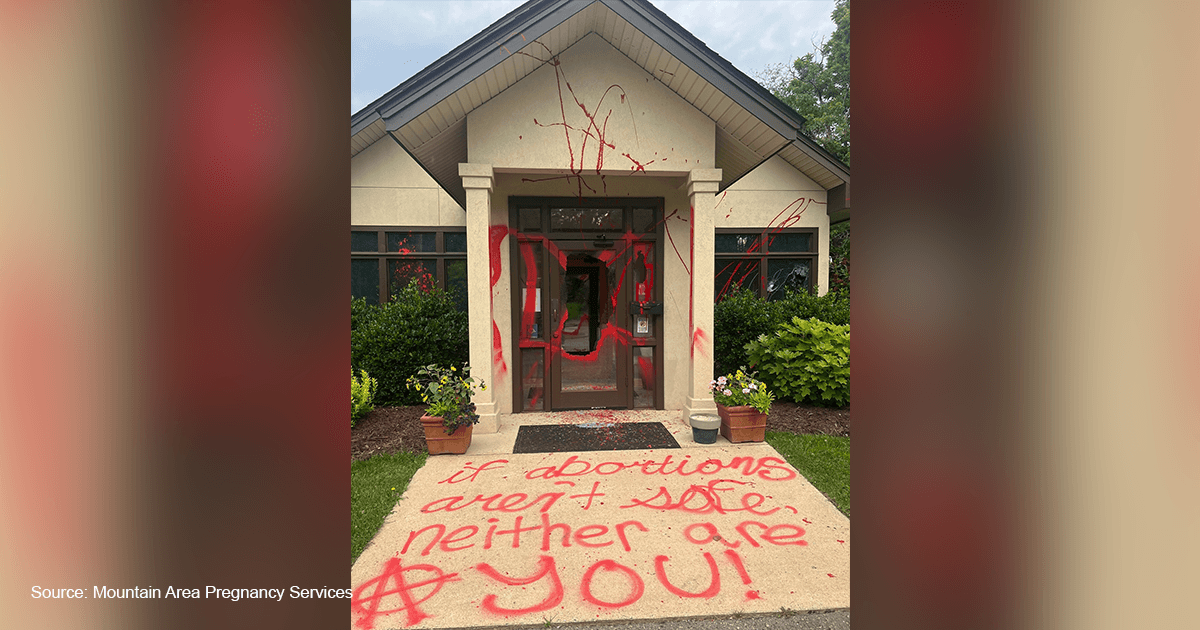 Abortion activists have committed 48 acts of violence or vandalism against churches, pro-life organizations, or individuals in the last 42 days — something that amounts to “a kind of war” against pro-life Americans, according to a Republican congressman.

Politically-motivated criminals targeted churches 20 times, pro-life women’s centers 23 times, and pro-life students or individuals five times since May 2, when someone leaked a Supreme Court opinion indicating that justices plan to overturn Roe v. Wade leaked to the media. As of this writing, the most recent attack came last Saturday, when someone set fire to a pregnancy resource center in Gresham, Oregon. “From initial investigations by [p]olice and [f]ire authorities, it appears an incendiary device was thrown through a window,” the group reported.

“This is a kind of war on the advocates for life,” said Rep. Chris Smith (R-N.J.), co-chair of the bipartisan Congressional Pro-Life Caucus, on Monday’s episode of “Washington Watch with Tony Perkins.” The attacks include arson, bomb threats, vandalism, theft, and aggressive physical contact. (You can see a full, updated list of such attacks here.)

“It’s all about pushing their agenda forward,” insisted Rep. Jody Hice (R-Ga.), who also appeared on the show. “And frankly, they don’t care if lives are going to be threatened, or potentially put in harm’s way, in the process. This is all about intimidation, instilling fear in hopes of advancing their continued efforts of destroying the lives of innocent children.”

The violence against religious institutions and pro-life women’s centers — which give expectant mothers diapers, baby clothes and, when they can find it, baby formula free of charge — does not so much represent a new threat as it does a transference of aggression, according to Smith. “I’ve been in the movement for 50 years, and I’ve always believed when we got to the point where that so-called constitutional [‘right’ to abortion] was about to be eviscerated, you would see the violence which is directed at unborn children directed at the pro-life movement.”

America stands “on the verge of reversal of Roe v. Wade,” Smith added. “I think this is the beginning of the end.”

Although the government has a duty to protect innocent individuals from violence, the Biden administration has done nothing to address attacks on pro-life advocates, much less stop them.

“It’s a total abrogation of their duty to protect people and property,” said Smith. “Yes, we’ve got the abortion president, Joe Biden, at the helm of this country, but he should be saying absolutely no violence. … Where is the president, right? He’s AWOL right now. And that has to change.”

Senate Majority Leader Chuck Schumer (D-N.Y.) should be leading the public calls for his side to embrace moderation, said Smith, particularly since Schumer once told two Supreme Court justices they “won’t know what hit you” if they authored rulings that contradicted Schumer’s views.

“That sounds like incitement to me,” argued Smith. “He needs to be held to account.” At a minimum, Schumer should tell abortion activists to “argue it out through debate, not through firebombing.”

The administration’s inaction spurred Smith to craft a bill protecting pro-life pregnancy centers. Smith said the bill would resemble the Freedom of Access to Clinics Entrance (FACE) Act, authored by the late Senator Ted Kennedy (D-Mass.) in 1993. That legislation outlaws blocking the doors at abortion facilities, although pro-life women’s resource centers face physical attacks on a regular basis — assaults which Smith points out are already illegal.

The chances of passing such a bill through the Democrat-controlled Congress — much less by a veto-proof margin — seems remote at the time. In recent weeks, Biden has faced mounting criticism for failing to protectpublic schoolchildren, pro-life advocates, Supreme Court justices, and Nigeria’s persecuted Christians.

Ultimately, Christians cannot trust in any earthly leader for defense, said Hice. Christians “believe in a God that is much bigger” than “any problem that we face individually or corporately as a nation.”

“We cannot respond by fear — that is paralyzing in itself,” urged Hice, perhaps referencing I John 4:18. “We cannot be silent at this time.”

Family Research Council President Tony Perkins agreed, “I think we need to draw the line at this point and say, ‘Look, you’re not going to intimidate us into silence or going away. We’re here, and we’re here to stay — to defend the unborn and to stand for moral absolutes.’”