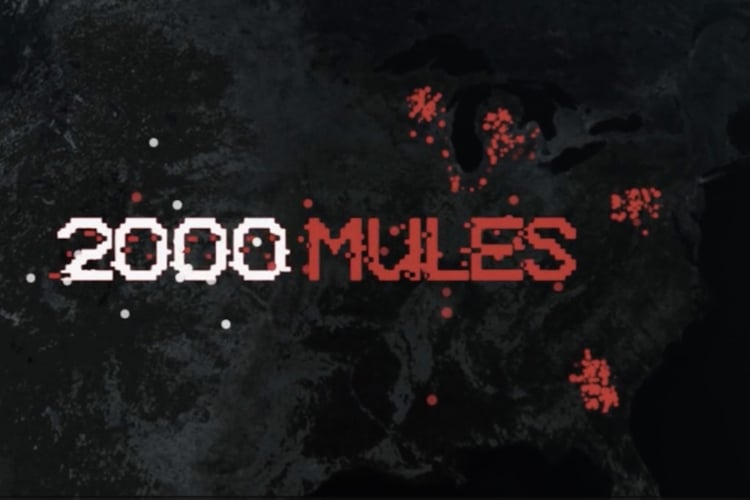 Dinesh D’Souza’s 2000 Mules documentary is debuting this week in hundreds of cities nationwide. I like D’Souza largely because of his up-from-poverty background and his aggressive fight for liberty.

However, I had no great expectations of the film, imagining a rehash of election irregularities already aired on Fox News — poll watchers kept 60 feet away in Philadelphia while cardboard was placed over windows to block their view, shifts of ballot counters that closed down for the night only to open within a half hour with no supervision but lots of new ballot boxes.

Other instances involved people dismayed to find, after standing in long lines to vote, that they had already voted. My favorite foible occurred, I think, in Georgia. It involved the ballot counter who ran the same ballots through the tallying machine multiple times. That must have been a good batch for her candidate.

Imagine my surprise to find no reports like that in the documentary. It was more like a thrilling Mission Impossible episode complete with Star Wars technology.

Many of us are aware that we can be tracked by our cell phones, even when they are turned off. Now imagine being able to track people who are paid to pick up ballots and run them to drop boxes at different locations around a city or even across counties.

These deliverymen are called “mules,” and D’Souza’s documentary takes us on an unbelievable ride with 2,000 of them, evincing that ballot harvesting was rife during the 2020 election.

2000 Mules cleverly portrays astonishing research by True The Vote, a group that began in 2010 for the purpose of stopping voter fraud. “True the Vote has the largest store of election intelligence for the 2020 elections in the world,” said investigator Gregg Phillips. “No one has more data than we do.”

They geo-tracked cell phones to what I’ll politely call “ballot modification stations.” Combined with surveillance video — 4 million minutes in all — their research uncovers a widespread system of organized crime and mass ballot manipulation.

“We identified, in Atlanta, 242 mules that went to an average of 24 drop boxes,” Phillips recounted. “In Philadelphia alone we’ve identified more than 1,100 mules.” One mule went across six counties to drop ballots at 27 different drop boxes in one night.

Patient investigators tracked mules making multiple runs to deliver fake ballots to at least 10 drop boxes per mule, in the month leading up to the election, usually in early morning hours by car, bicycle, or even on foot. Security cameras captured mules taking photos as they made their drops. Were they naïve, or were the mules assured of protection from consequences of their illegal acts? Were the pictures required as proof for payment purposes?

The documentary covers multiple states and reveals a national conspiratorial network. Is “conspiracy” too harsh a word to use? Consider this: The Federal Bureau of Investigation snared one mule early in the operation by monitoring his fingerprints on area drop boxes. The day after that story broke, mules around the country used latex gloves when depositing ballots, disposing of them in nearby trash cans when the deed was done.

Then think about the amount of money involved in the project. At roughly $10 per ballot plus the costs of setting up offices and hiring ballot collectors, ballot forgers, security, and expert criminal advisors, there are major bucks being paid here. But this is where 2000 Mules fails to surprise, because the multimillions involved emanate from the likes of Mark Zuckerberg, George Soros, and other woke associates who are some of the world’s greatest enemies of freedom.

The documentary and D’Souza’s yet-to-be-released book by the same name will give skeptics a run for their money in their continual accusations that President Donald Trump is lying when he calls the 2020 election “fixed.” Those who have the courage to watch this documentary will have their chance on May 4 in hundreds of theaters nationwide. Alternately, the virtual premier at 2000mules.com is planned on Saturday, May 7, and includes a live Q&A with D’Souza and True The Vote investigators following the debut.